Are you a fan of the hit cartoon Steven Universe? Have you ever wanted to play out stories set in this world with your friends? Do you like free pen and paper role playing games? Then Faceted is for you!

Faceted is a pen and paper game set in the Steven Universe world, using the extremely adaptable Powered by the Apocalypse engine to allow you to create characters quickly and jump right into playing out your stories.

Oooh, I love this a whole lot!

This is really cool! I hope I could get to be in a game with this system one day, it sounds awesome.

I've been running a game of Faceted and having a blast.

You play a small crew of Gems known as the Birthstones.

It’s your job to explore the galaxy scouting out new planets for gem colonization and to advance the agenda of the Diamond Authority.

But, you have a secret: You are all off-colors, and nobody knows it. You and your friends have hidden ‘flaws’ that you're desperately trying to cover up.

While on Homeworld you are welcomed as heroic explorers and attend balls and parties, brushing shoulders with the upper crust of gem society but the whole time you must hide who you really are and play roles you would rather leave behind.

While away on missions you’re in constant danger but at least you can be yourselves and show your true colors.

Will you fight for your place in gem society? Or will you escape to a world where gems can be themselves?

this absolutely rocks! i'm glad you're having fun with the game!

When is xp gained? end of session move only or failures also like most pbta?

end of session only; its to allow for a longer campaign where growth happens slowly, much like in the show. if you want, you can do it on a failure like other pbta games, but you will have people levelling up significantly faster!

thanks! if you ever run it, let me know; i'd be interested in seeing how it plays out for someone who didn't design the game lol

I'm starting a campaign, we had a intro scene but so far we have only seen a lone gem that's stranded on mars with humans hunting her. So no fusions. I will update you. 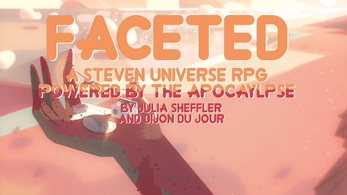